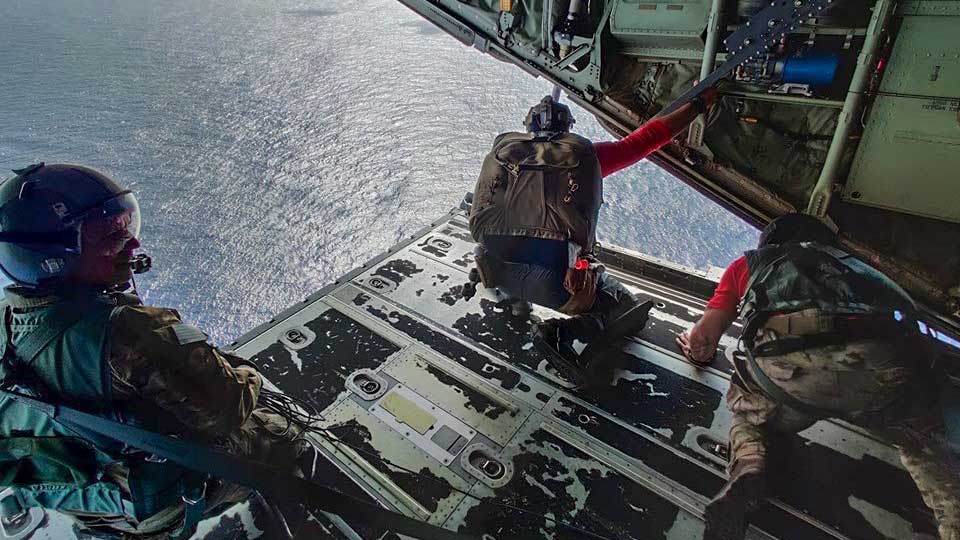 VIEW LARGER Pararescue jumpers from the 563rd Rescue Group at Davis-Monthan Air Force Base prepare to parachute to a fishing vessel in the Pacific Ocean, July 2019
U.S. Department of Defense

The men were injured when a crane on their fishing vessel collapsed.

The nearest medical facility was at Mexican naval base more than 800 miles away.

Planes from Davis-Monthan flew pararescue jumpers, also called PJs, to the area. They then parachuted into the ocean near the fishing vessel.

Once onboard, the PJs provided care to the men during the trip to the naval base.

The rescue was the longest domestic rescue in the history of the 563rd Rescue Group.

In 2014, another group of PJs from Davis-Monthan helped badly burned fishermen in the Gulf of Mexico.

Opponents speak out at hearing on bringing F-35 fighter jet to Tucson What’s the military’s economic impact in Arizona? World War II veteran receives Purple Heart 76 years later
By posting comments, you agree to our
AZPM encourages comments, but comments that contain profanity, unrelated information, threats, libel, defamatory statements, obscenities, pornography or that violate the law are not allowed. Comments that promote commercial products or services are not allowed. Comments in violation of this policy will be removed. Continued posting of comments that violate this policy will result in the commenter being banned from the site.