Workers brought their fight to the state Capitol on Monday, rallying to demand that lawmakers hold foreign companies accountable for their treatment of U.S. workers. by Kara Harris, Cronkite News Tweet 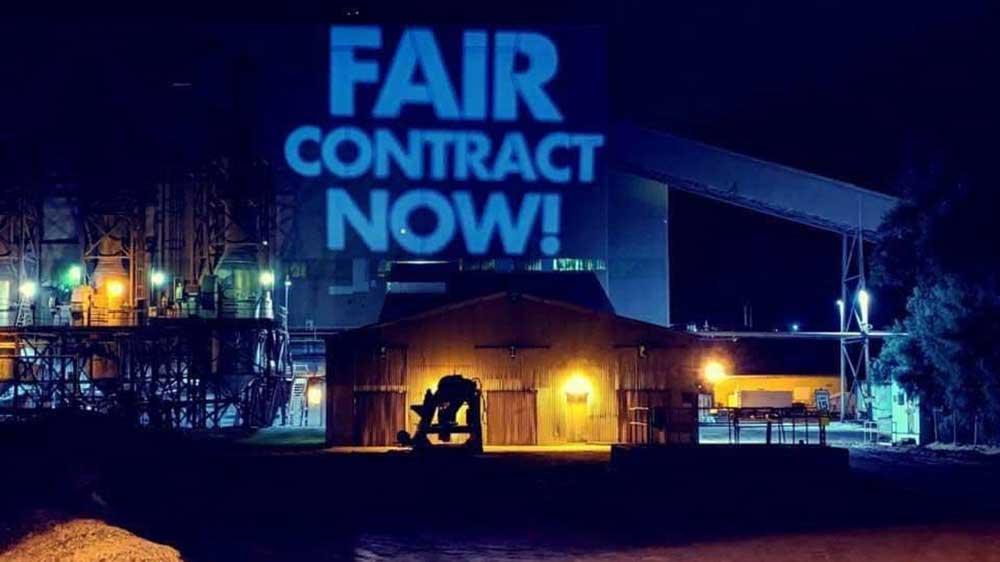 VIEW LARGER Workers made their demands known at the start of their strike against Asarco by projecting them on to the side of company facility in Hayden. That was Oct. 13, and workers are still on strike three months later, with the two sides apparently not closer to a settlement.
Photo courtesy United Steelworkers Local 886

WASHINGTON – Union leaders say the close to 1,800 striking Asarco workers in Arizona and Texas remain “strong” as the strike entered its fourth month Monday, with little hope of a settlement in sight.

“They are hoping that it ends soon but they know it can go on for a while,” said Ruben Gonzales, vice president of United Steel Workers Local 937.

The union has tapped its strike relief fund, and some workers have had to take temporary jobs to help pay the bills. But union leaders and supporters say they are in for the long haul and are getting support from the community that has helped workers cope with the length of the strike.

“We haven’t had one member lose their home, we’ve never had a repo’ed vehicle, no one’s lights are being shut off,” Gonzales said. “The waters are staying on, the gas is staying on.”

Workers brought their fight to the state Capitol on Monday, rallying to demand that lawmakers hold foreign companies accountable for their treatment of U.S. workers.

The strike began Oct. 13, two days after a reported 77% of workers rejected a contract proposal that union officials said would have frozen hourly wages for most workers, doubled out-of-pocket health care costs and made it harder for workers to qualify for bonuses. Union leaders called the offer an insult to workers, many of whom have not seen a raise since 2009.

“Our members were very upset, it’s like a slap in the face for them,” Gonzales said. “They aren’t asking to make millions. These employees are why this company is so rich.” 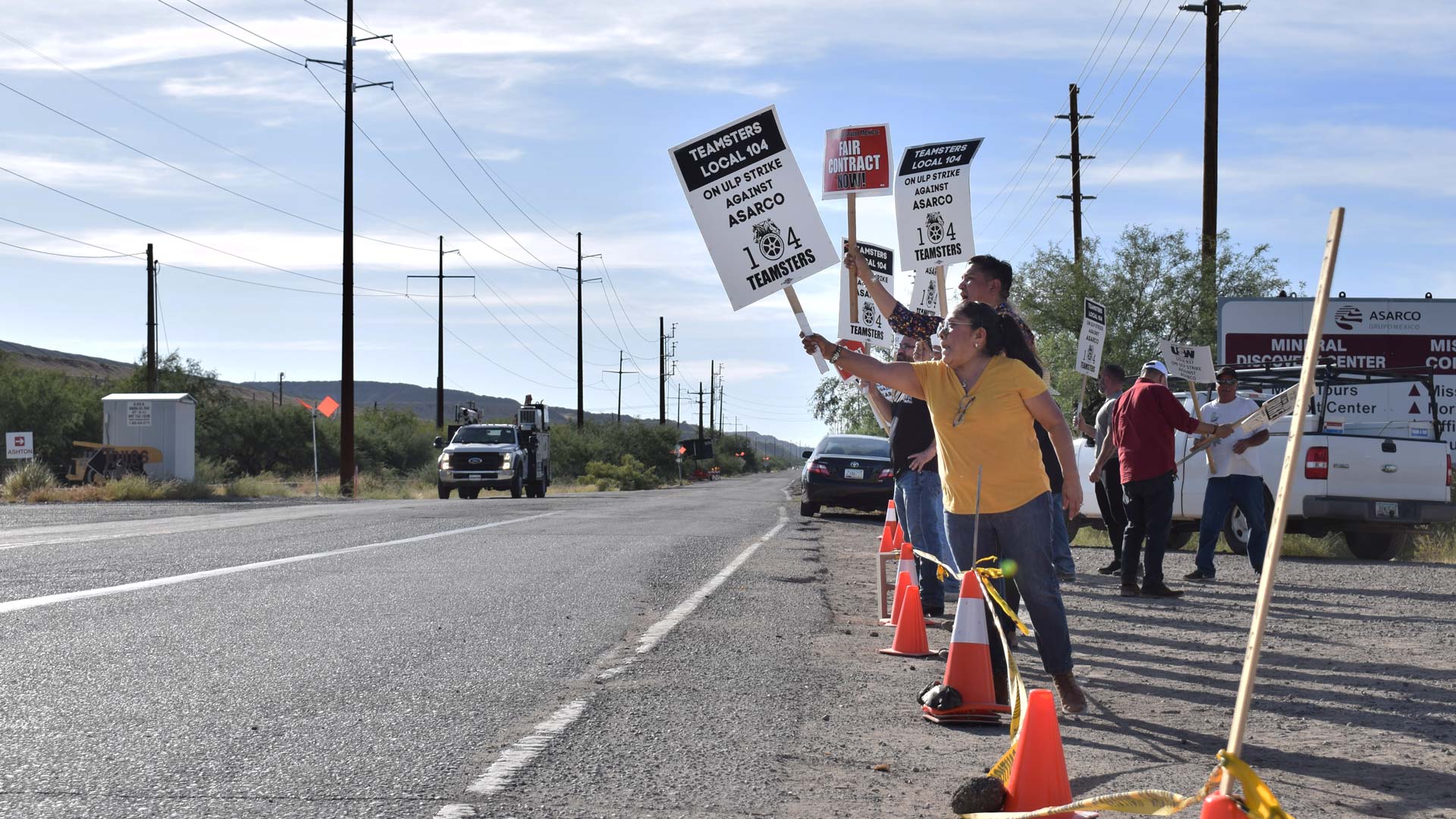 Striking workers picket outside the Mission Mine in Sahuarita on Oct. 16, 2019.
Jake Steinberg/AZPM

In December, the company imposed the rejected contract, which it called its “last, best and final” offer, resulting in a freeze on pensions in addition to extending the decade-long pay freeze and raising health care contributions.

Asarco did not respond to calls for a comment on the strike.

But Rep. Raul Grijalva, D-Tucson, who joined other lawmakers on the picket line Saturday in Tucson, said that, “Instead of valuing their workers and providing them with living wages and benefits, ASARCO is treating them as expendable.”

“I stand in solidarity with workers in the face of corporate abuse and demand that corporations treat their workers with the dignity they deserve,” Grijalva said in a statement after joining picketers.

Others have thrown their support behind the striking workers.

“There was no question in our minds that we were going to be there,” said Dominique Hamilton, a member of National Nurses United, which has joined striking Asarco workers on the picket lines.

When the nurses’ union went on strike against St. Mary’s and St. Joseph’s hospitals in September, Hamilton said, “A lot of people from the mines … came to our strike lines in solidarity.” Though their strike only lasted for a day, the nurses said it is important to support the Asarco workers.

“We are of the same communities, there are nurses at my hospital whose father, brother, husband, and sons are miners,” said Hamilton, who also has patients affected by the Asarco strike.

A group of nurses has also started collecting goods for strikers and their families.

“We are constantly accepting food donations, monetary donations, we also accepted gift donations for the strikers’ children for Christmas,” said Veronica Martinez, field and communications director for the Arizona AFL-CIO.

The Community Food Bank of Southern Arizona in Tucson offers access to steelworkers and their families, and Martinez said various community organizations have joined the “sponsor the picket line” initiative.

“They will bring a meal out on a specific day to the picket line,” she said.

Dwight Metzger owns the Gloo Factory, a union print shop in Tucson, and said he was busy last week finishing deadline orders for Monday’s rally at the state Capitol.

“We’ve donated picket signs, buttons, stickers, and T-shirts,” Metzger said. “I just want to applaud all the workers … risking so much for their families and for a better workplace in general.”

Gonzales said the union has dipped into its strike relief fund to help workers stay afloat.

“We are making sure our members are getting by,” said Gonzales, who could not predict when the strike might end.

But Metzger said it was important to support the striking workers.

“These values of worker solidarity are seemingly more and more lost in a globalized economy,” he said. “What they are doing is really brave, we all need to be supporting them.”

Arizona’s Democratic legislative leaders on goals for new session Automation could leave many Arizonans out of work, study warns Senate hears bill on Grand Canyon mining
By posting comments, you agree to our
AZPM encourages comments, but comments that contain profanity, unrelated information, threats, libel, defamatory statements, obscenities, pornography or that violate the law are not allowed. Comments that promote commercial products or services are not allowed. Comments in violation of this policy will be removed. Continued posting of comments that violate this policy will result in the commenter being banned from the site.