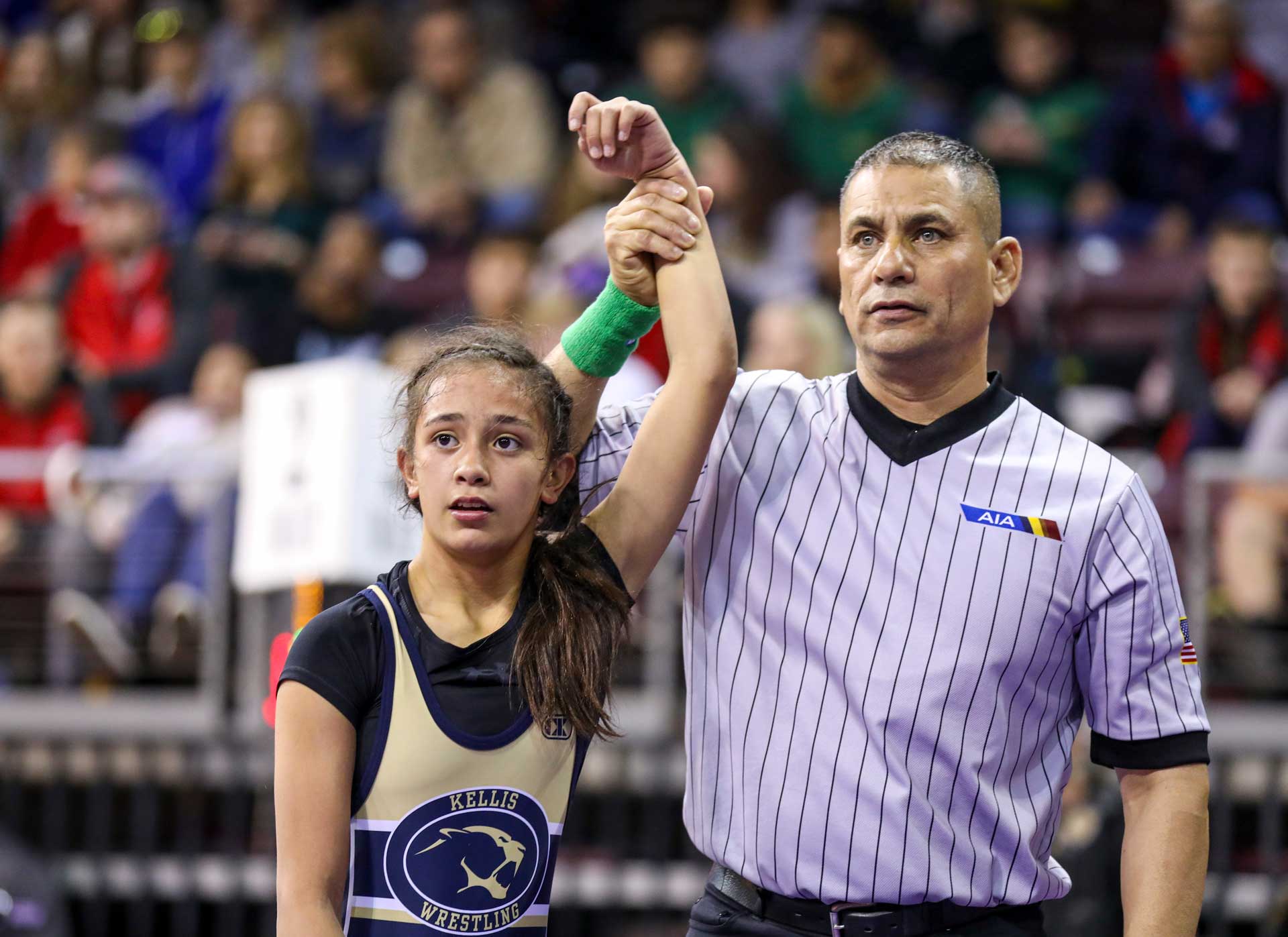 Erica Pastoriza of Raymond S. Kellis High School in Glendale has her arm raised by an official after capturing third place in the 101-pound weight class at the 2020 AIA Girls Wrestling State Championships. The amount of girls wrestling in Arizona has almost doubled in one year.
Travis Whittaker/Cronkite News

The Arizona Interscholastic Association, which governs high school sports in the state, added girls wrestling to its list of sanctioned sports for the 2018-19 school year, and in its second season, the sport’s participation numbers jumped by 44 percent. It is a growth trend that officials expect to continue.

“We went from approximately 486 certified wrestlers (in year one) to around 868 (in year two),” said Dean Visser, sports administrator for the AIA.

Before the AIA sanctioned girls wrestling, high school girls had to wrestle against boys if they wanted to compete.

“Girls just want the opportunity to participate,” said Elliot Hopkins, the wrestling rules editor and rules interpreter for the National Federation of High School Sports (NFHSS), whose umbrella the AIA and other state organizations fall under.

Wrestlers competed over the weekend in Prescott Valley at the second all-girls state tournament held at the Findlay Toyota Center, where 10 individual state champions were crowned. 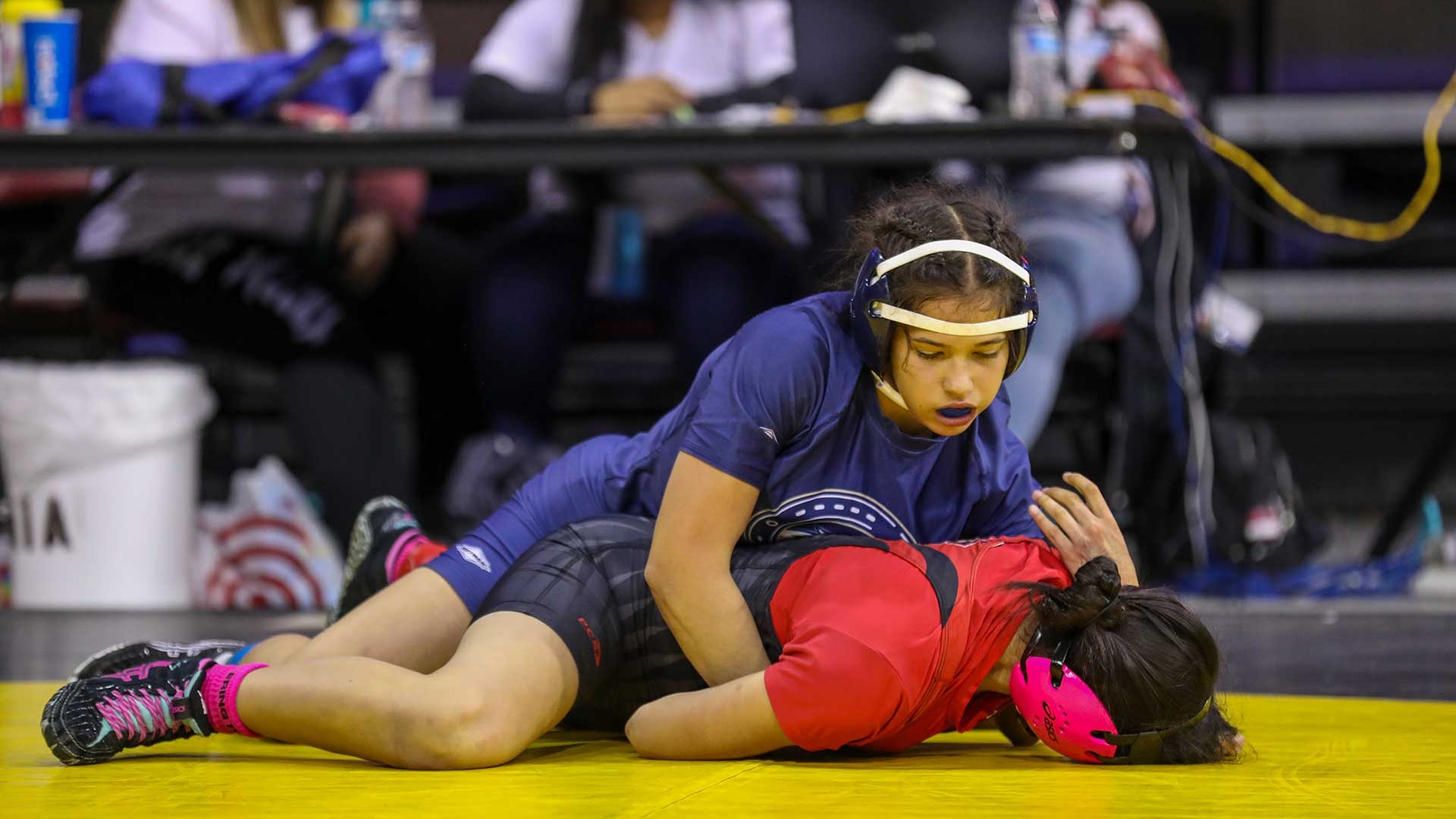 The field of wrestlers at the event reflects the rapid growth of girls wrestling in Arizona in just two seasons.

“We went from five sectional tournaments to eight.” Visser said. “We tried to do it geographically. (We) couldn’t really do it by size of school because everyone is thrown into Division 1.”

All 10 weight-class brackets were filled in the state tournament, with 16 girls wrestling in each class.

As the sport grows, there are challenges, but the AIA and its member schools are trying to overcome them to put girls programs on equal footing with boys teams.

“The biggest challenge for the schools is scheduling,” Visser said. “Where can they find schedules and duals are pretty difficult. They have done a nice job of combining invitationals of a girls component with a lot of those boys tournaments, i.e. Flowing Wells and Moon Valley.”

The Flowing Wells Invitational in Tucson and the Moon Valley Invitational in Phoenix traditionally have been among the biggest events in boys wrestling. So far, the AIA has not scheduled dual meets for girls teams, but it attempts to match up girls teams whenever the competing schools have girls and boys programs.

The girls also don’t compete for a team state championship yet, but that is a future goal. Hopkins said the NFHS doesn’t require it.

“It’s up to each individual state association,” Hopkins said. “We wouldn’t get involved in that. What we could come up with may not work in Arizona or Texas. Each state is responsible for doing what the best interest is to promote the sport locally.” 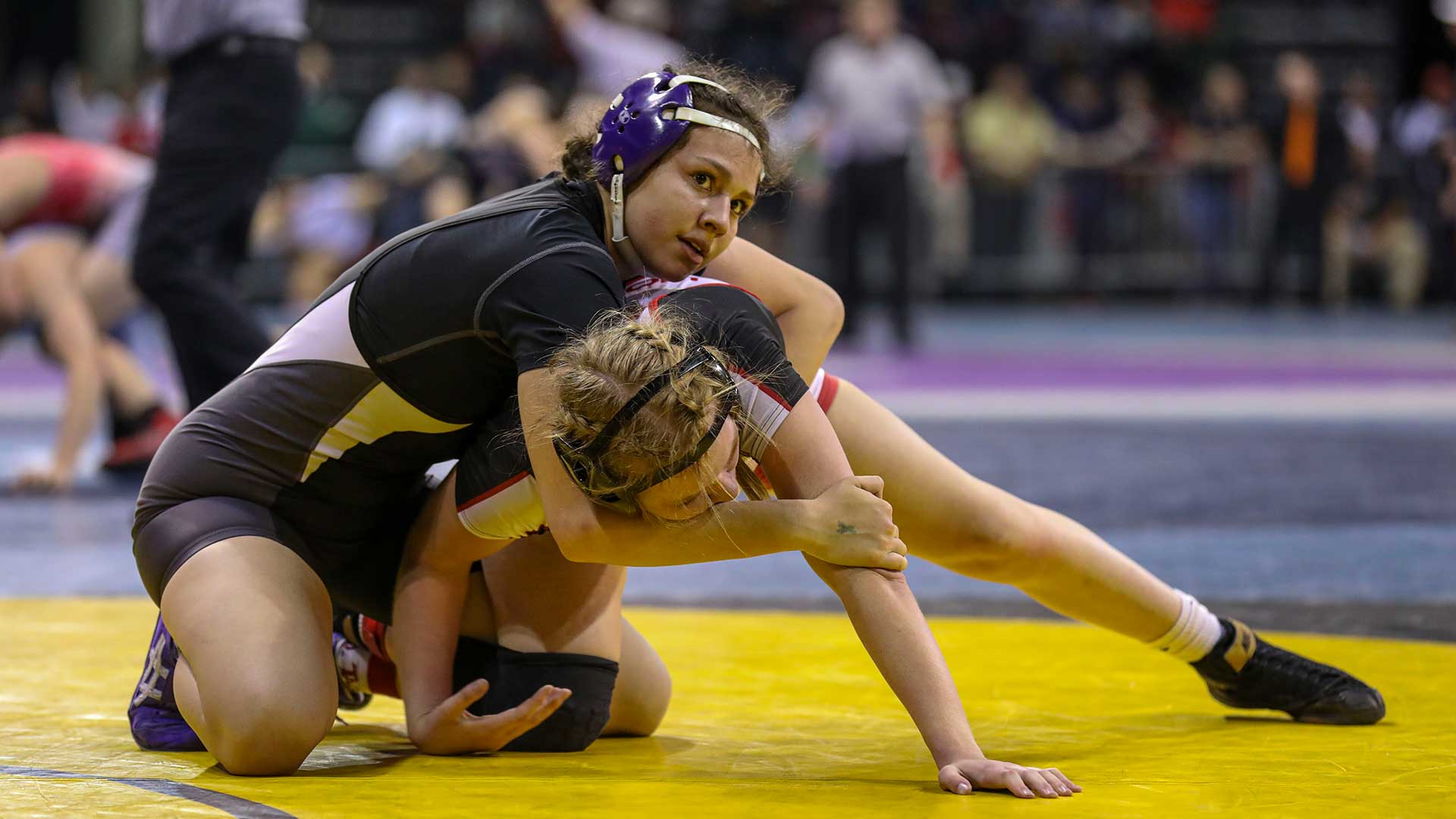 VIEW LARGER Isabelle Munoz of Casteel (top) works to turn Adacelli Noriega of Bisbee in the state finals of the 2020 AIA girls wrestling state championship match at 118 pounds. Girls don’t compete for a team title yet but could in the future.
Travis Whittaker/Cronkite News

David Gonzalez, who coaches at Desert Vista High School and serves on the 6A Wrestling Sports Advisory Committee, said it’s something that will get done.

As the sport continues to grow, Visser believes there is the potential for a girls team championship within the next five years, but there are hurdles there, too.

“The challenge will be if it grows big enough to do two championships — small school and a large school,” Visser said. “What will hold that back is how many participants the small schools can get. They only have a set amount of kids. They don’t have 4,000 kids.”

Whether girls wrestling in Arizona remains in one division or expands to two, the sport appears to be positioned for continued growth, giving girls a chance to test their skills on the mat.

“You can be coached and taught at the high school level,” Visser said. “It’s not like you have to have a certain skill level. If it’s somebody willing to work, they can learn to do it.”

Education in the summer Arizona House GOP backs universal school voucher expansion House committee advances school voucher expansion
By posting comments, you agree to our
AZPM encourages comments, but comments that contain profanity, unrelated information, threats, libel, defamatory statements, obscenities, pornography or that violate the law are not allowed. Comments that promote commercial products or services are not allowed. Comments in violation of this policy will be removed. Continued posting of comments that violate this policy will result in the commenter being banned from the site.