Arizona still at home, but taking first steps toward reopening

As the stay-at-home order continues, elected officials and medical professionals consider what it will take to reopen the state. by Ariana Brocious Tweet 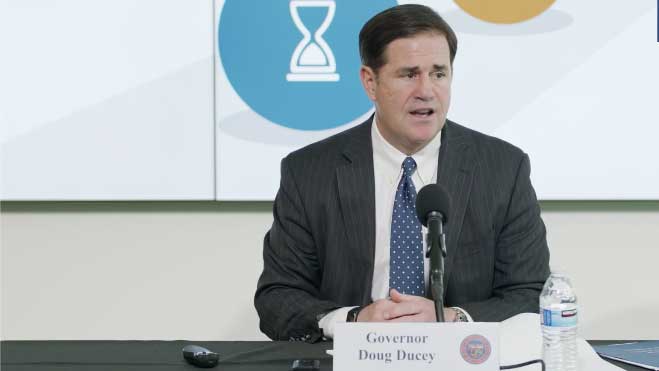 Arizonans will remain under a stay-at-home order for at least two more weeks.

On Wednesday, one day before the original order was set to expire, Gov. Doug Ducey extended it through May 15. He gave thanks to all those who have followed the social distancing guidelines and helped slow the spread of coronavirus infections.

"Our physical distancing is working," Ducey said during the press conference. "Your cooperation is working. I'm confident that we can say that we've seen the spread has been slowed and these have been hard-fought gains. We've earned where we are today, and we are not going to undo this."

The governor said he reviewed state data on the availability of hospital beds, intensive care unit beds and ventilators, and assured the public that Arizona continues to have capacity for more cases. He said while the state has not seen a major spike in cases, there also has not been a strong downward trend in infections or deaths yet.

The modified stay-at-home order does allow some businesses that have been closed to begin reopening starting Monday. Service is limited to curbside delivery for the first week, after which time customers will be allowed back in stores that have sufficient protocols in place. Certain businesses like bars, gyms and hair salons were not included in that part of the order.

"The objective is that we do return stronger, economically," Ducey said. “We are going to focus on public health."

Ducey said the state will work with the restaurant industry to gradually reopen dining rooms across the state, starting as early as May 12.

Ducey promised testing will increase, starting this weekend with a "testing blitz" available to anyone who thinks they are infected or has been exposed to the virus. Antibody testing, led by the University of Arizona, is also ramping up.

Shortly before Ducey's announcement, the mayors of Tucson, Phoenix and Flagstaff all called for the governor to maintain his executive order until it could meet the Centers for Disease Control and Prevention guideline that calls for 14 days of declines in COVID-19 cases before reopening the economy.

Tucson Mayor Regina Romero later said she was pleased that the governor consulted with science and public health officials to decide to keep the stay-at-home order in place.

However, she said she wants the governor to issue clearer and stricter guidance for the businesses allowed to reopen on May 8.

Romero said she's concerned that some businesses that have stayed open have not taken the social distancing requirements seriously. She said while the police and health department have been issuing warnings, that may soon change to stronger enforcement methods to ensure businesses follow best practices.

Tell us something good! We'd like to celebrate the ways you're making the most of the situation. Click to tell us your story. We'd like to hear from you.

In the research world, scientists are working overtime right now. Every day seems to bring news of additional findings about the coronavirus, possible therapies and eventual vaccines. The Buzz talked with Michael Worobey, who leads the University of Arizona's Department of Ecology and Evolutionary Biology.

"The key thing that we are finding is that this outbreak is going to be with us until we control it everywhere," Worobey said.

For now, he said virus testing to see who is currently infected is the most important step to take. People with the infection, even those who are asymptomatic, can be isolated to stop the transmission of the disease.

"You reduce the average number of people being infected by each patient down below one," Worobey said. "Until that point, the outbreak still grows and grows and grows."

The UA is focused on antibody testing to see who in the community already has antibodies for the coronavirus. President Robbins announced Thursday that he plans to reopen the campus in the fall with widespread antibody testing for students and staff.

"[These tests will] become increasingly important as we move through this epidemic and more and more of us become infected and hopefully have protective antibodies that will protect us from being infected again," Worobey said.

However, as Wororbey and the UA antibody testing’s website point out, it is not yet known for certain if the presence of antibodies means a person is immune to COVID-19 or how long that immunity will last. 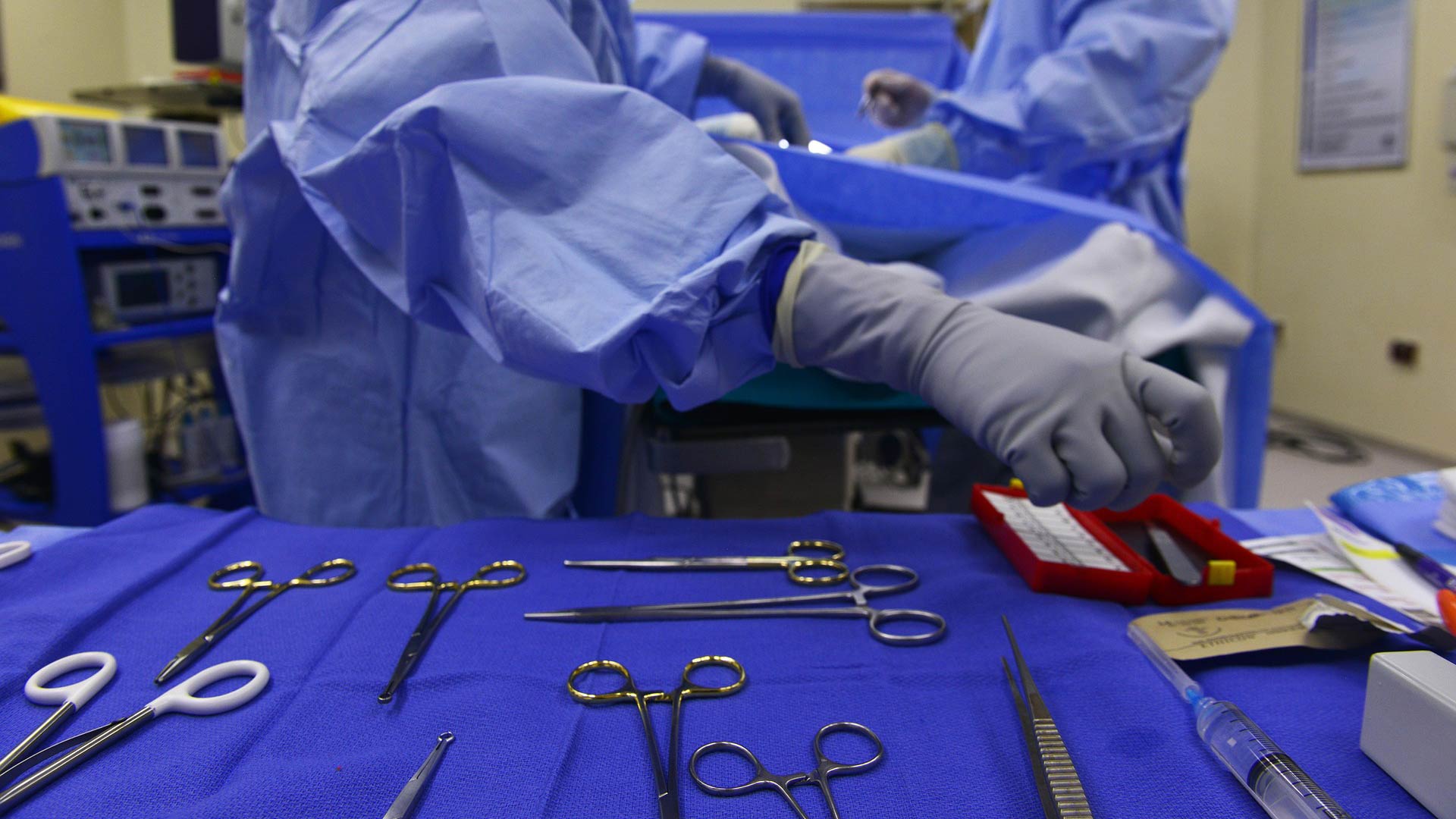 Even though the governor's stay-at-home order will last another two weeks, elective surgeries were allowed to resume at hospitals Friday.

In the health care industry, elective surgeries represent the majority of surgery performed, according to Dr. Edward Miller, the chief medical officer at Copper Queen Community Hospital in Bisbee.

He described nonelective surgeries as immediate, life-saving surgeries. Elective surgeries, on the other hand, are generally planned, like hip replacements or gall bladder removal.

That was also true for the Santa Cruz Valley Regional Hospital, an independent hospital in Green Valley. While it is in a growth area, with nearby Sahuarita booming, CEO Kelly Adams said the facility was nearly forced to shut its doors when the ban on elective surgeries was announced because people stopped coming to the hospital.

Santa Cruz Valley did receive some advance Medicare payments from the federal government, but those are considered loans that have to be paid back in about four months. Kelly also said state funds have also helped keep the doors open.

The governor has now allowed elective surgeries to resume, but getting back to normal operations is not that easy, according to Copper Queen Community Hospital's Miller.

"The constraints are very prohibitive," Miller said. "Primarily if you start doing elective surgery, one, you have to assure that you have a 14-day supply of [personal protective equipment]. And two, if you start doing elective surgery, you can no longer ask the state or county health departments for additional PPE. I think most burdensome is the requirement that all, quote, at-risk health care workers and each patient be tested for COVID-19 pre-operatively."

Despite those restrictions, he said Copper Queen has applied to the state to restart elective surgeries. It was a financial necessity. The hospital has also received some federal dollars and is applying for grants.

The Santa Cruz Valley hospital has done the same. But Adams said that does not mean an immediate end to financial problems.

"The thing that we don’t know is how soon is the community going to be responding?" Adams said. "Are they going to feel comfortable coming back into hospital?"

The pandemic has hit everyone in different ways, especially if someone’s job requires them to take care of others.

University of Arizona journalism student Maury Urcadez shared her story with The Buzz. Her mother runs a day care service out of their house. Urcadez said that many of the parents using their service are essential workers.

"One of the moms whose kid we watch works for Target, so she’s working now more hours than before," Urcadez said. "Another parent cleans houses. She needs the help. And another one is pregnant, about to have the baby, so she needs child care for her 5-year-old. For us, business is booming."

She and her mom have ramped up their cleaning and disinfecting of the children’s area. Urcadez has to balance working at the day care with her university classes. She said for Zoom classes, she often mutes herself so the sounds of kids playing cannot be heard on the call.

Urcadez said that kids are aware that a sickness is going around and that she and her mom have advised them on ways to stay healthy, like wearing masks and staying home.

Arizona Chamber of Commerce throws support behind Ducey’s pandemic recovery plan Pima County Issues Ground-Level Ozone Advisory Pima County tourism saw strong rebound in 2021
By posting comments, you agree to our
AZPM encourages comments, but comments that contain profanity, unrelated information, threats, libel, defamatory statements, obscenities, pornography or that violate the law are not allowed. Comments that promote commercial products or services are not allowed. Comments in violation of this policy will be removed. Continued posting of comments that violate this policy will result in the commenter being banned from the site.