The humpback chub is one of about a dozen that are native to the Colorado River system and four that are currently endangered. by Associated Press Tweet

The U.S. Fish and Wildlife Service has reclassified a rare Colorado River Basin fish called the humpback chub from endangered to threatened status after a decades-old effort to stabilize its populations. 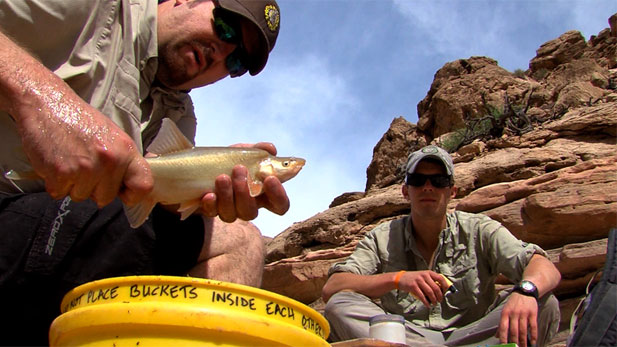 Arizona Game and Fish focuses on efforts to study and save the endangered humpback chub, a small fish that lives in the Little Colorado River in the Grand Canyon region.
AZPM

The fish with a fleshy bump behind its head is one of about a dozen that are native to the Colorado River system and four that are currently endangered.

Federal officials say the numbers have stabilized but the fish needs continued protections in the Grand Canyon and parts of Utah and Colorado.

It once had a broader range in the Colorado River Basin, but dam construction and the introduction of non-native predator species led to local populations becoming extinct.

Humpback chub 'alien abductions' help frame the future of the Colorado River Proposals would dam Little Colorado River for hydropower Here's how to help prevent wildfires this summer
By posting comments, you agree to our
AZPM encourages comments, but comments that contain profanity, unrelated information, threats, libel, defamatory statements, obscenities, pornography or that violate the law are not allowed. Comments that promote commercial products or services are not allowed. Comments in violation of this policy will be removed. Continued posting of comments that violate this policy will result in the commenter being banned from the site.