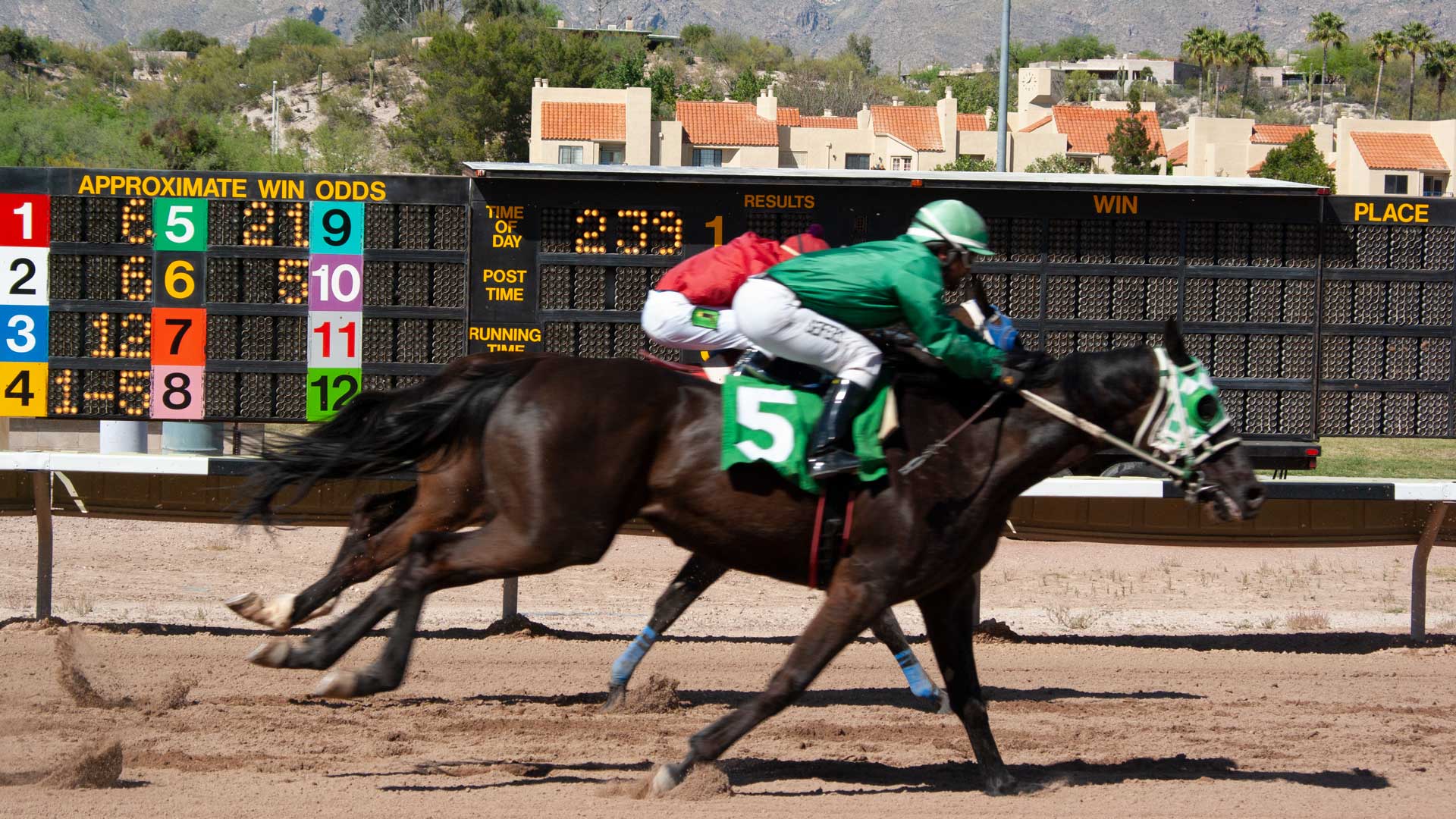 Horses stretch for the finish line at Rillito Downs in Tucson.
Christopher Conover/AZPM

When you walk into Rillito Park, one of the first places you try to find is the paddock.

It's the place where the horses are brought in front of the spectators for the first time. They're paraded slowly in a circle, and you can stand just a few feet away.

And in the middle of that circle, broadcasting live on television, you will see and hear two University of Arizona students.

Hailey Shiffer is an on-air handicapper. She's a second-year student with the UA's Race Track Industry Program. But don't look for her on a TV screen calling a race as a track announcer in the future.

"I want to have my own place that does sales prep, rehab and retraining for off track thoroughbreds," she said. "That's where I'm happy."

Her co-host, Michael Sandulli, also has a love for the sport. He's got an eye for detail, looking for that special quality that makes some horses faster than others.

"Every horse is different," explains Sandulli. "You can't tell me otherwise."

The students do their research, look up the statistics, and relay who they think is the best horse to put money on. It might provide a bit of an edge for railbirds watching at the track or at some far-flung location across the country, tuning-in for a piece of the action online.

The Program's best-known alum happens to be the sport's most successful trainer. But Bob Baffert's winning entry was stripped of last year's Kentucky Derby title, adding to the Nogales native's colorful and controversial past. Medina Spirit's victory was marred by a finding of performance enhancing drugs. Then the horse died from a heart attack last December.

Tragedy struck Rillito Park, too. It was among the tracks in Arizona where horses died while competing in the first weekend of the season. Pima County issued a memo last week emphasizing the facility met all mandated safety requirements.

The track maintains its place as a slice of Tucson and southern Arizona sports history. The facility was started 79 years ago, built on a riverside stud farm owned by J. Rukin Jelks. Jelks was one of the founders of American Quarter Horse racing, the kind where the riders guide the horses to a straight-line finish. Jelks built an oval for the more familiar format of thoroughbred racing in 1953. The use of cameras for the "photo finish" was pioneered at Rillito Park.

The University of Arizona lets students experience Rillito Park's past and present. Race track general manager Michael Weiss notes any student who wants a job during the racing season can get one.

"Our social media is run by students, working alongside the veterinarians, they run the show," he says.

"I was doing a paper on for a public relations class and I was talking to Mike about the track's history," she said. "(We talked about) what was being done to maintain it so we could get ready for the upcoming season. On opening day, I walked up and saw him and that's how I got here."

For each of the students, participation in the program has been a challenge. The COVID-19 pandemic wiped out live action at Rillito Park last year. That meant the students looking to graduate into the horse racing business lost a significant part of time to gain experience in Tucson.

Internships filled the gap, but it wasn't exactly the hands-on work the students get here.

"I've learned countless things that I will always carry for the rest of my life," said Sandulli. "And as a future trainer, these are lessons that I will be carrying with me. The more experience you have, the more you can work with each horse and their differences."

The aristocracy of British society lent horse racing the title "the Sport of Kings." For students who intend to make the industry the focus of their post-graduate careers, solid footing alongside Tucson's legendary dirt track is a spectacular way to start.

Horse deaths spark concern in racing industry Rillito Foundation Offers 30 Internships With UA Agriculture College Rillito Horse Racing Gets Another Lap: Through 2021
By posting comments, you agree to our
AZPM encourages comments, but comments that contain profanity, unrelated information, threats, libel, defamatory statements, obscenities, pornography or that violate the law are not allowed. Comments that promote commercial products or services are not allowed. Comments in violation of this policy will be removed. Continued posting of comments that violate this policy will result in the commenter being banned from the site.