Over two years she stole tens of thousands of dollars from a group helping the National Guard. by Christopher Conover Tweet 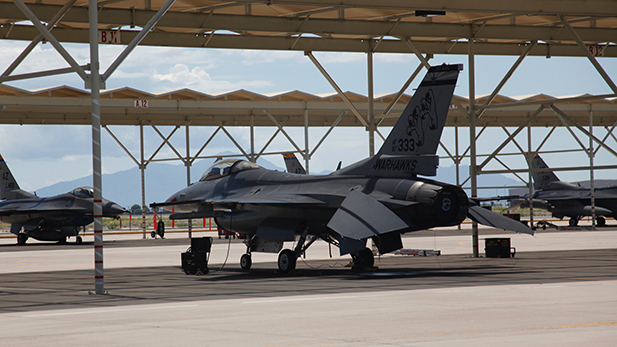 One of the 80 F-16s that fly out of the Arizona Air National Guard's 162nd Fighter WIng.
Zac Ziegler

A Tucson woman was sentenced to four years probation and 30 days in jail for embezzling $84,444 from the Jimmy Jet Foundation.

The foundation is a non-profit that assists members of the community and the Air Force National Guard’s 162nd Fighter Wing based at Tucson International Airport.

Amy Lyn O’Neill, was the president of the foundation when she took the money which she used to pay her mortgage, credit cards, and other personal expenses.

The sentence was announced by Arizona Attorney General Mark Brnovich.

Arizona House GOP backs universal school voucher expansion Pima County will send 80,000 replacement voter cards Arizona House speaker testifies on efforts to overturn the 2020 election
By posting comments, you agree to our
AZPM encourages comments, but comments that contain profanity, unrelated information, threats, libel, defamatory statements, obscenities, pornography or that violate the law are not allowed. Comments that promote commercial products or services are not allowed. Comments in violation of this policy will be removed. Continued posting of comments that violate this policy will result in the commenter being banned from the site.