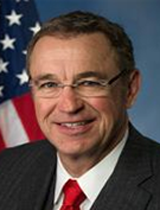 Salmon, R-Ariz., first proposed a term-limits amendment to the Constitution in the 1990s, when he served three terms in Congress. He pointed out in a press release Monday that he did not seek reelection in 2000 at the end of his third term to keep a pledge he had made when first elected.

“Since the day I first took office, I have advocated for universal congressional term limits," Salmon said in the press release. "Now more than ever, citizens need to see accountability and responsibility from their elected representatives at all levels of government."

Salmon's proposal would require two-thirds approval in both the U.S. House and the U.S. Senate and ratification by the legislatures of three-fourths, or 38, of the 50 states.

McSally Takes Seat in Congress Tuesday Senate Concurrent Resolution 1007 -Term Limits Ducey signs bills limiting school mask, vaccination rules
By posting comments, you agree to our
AZPM encourages comments, but comments that contain profanity, unrelated information, threats, libel, defamatory statements, obscenities, pornography or that violate the law are not allowed. Comments that promote commercial products or services are not allowed. Comments in violation of this policy will be removed. Continued posting of comments that violate this policy will result in the commenter being banned from the site.