Passenger trends emerge, including - no surprise - summer as slowest time of year. by Andrea Kelly Tweet 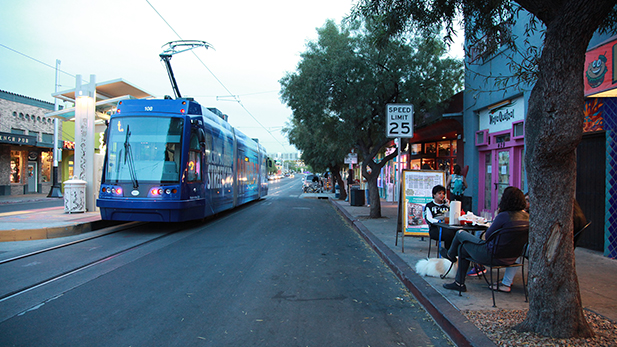 It took 10 months for the streetcar to attract 1 million riders, and 14 months to reach the second million. Trends in use are emerging, said Shellie Ginn, Tucson transportation planning administrator.

“We do see that the fall and the spring have higher ridership. This time of year is pretty much our lowest time of ridership,” Ginn said.

That's because 50 percent of the riders are students at the University of Arizona, on the move in spring and fall for classes and night life, Ginn said.

"So we definitely see an increase when they come into town.”

The city has attributed much economic development downtown to the new transit system, Ginn said.

Economic development was one of the city’s goals with the streetcar route, in addition to moving people through a part of town where many work or live.

The streetcar schedule is under constant evaluation according to the times most people are riding, Ginn said.

Much-Debated Extension of Phoenix Light Rail Under Scrutiny Streetcar Celebrates Third Anniversary Saturday Streetcar Rides, Revenues, Keep Picking Up Steam
By posting comments, you agree to our
AZPM encourages comments, but comments that contain profanity, unrelated information, threats, libel, defamatory statements, obscenities, pornography or that violate the law are not allowed. Comments that promote commercial products or services are not allowed. Comments in violation of this policy will be removed. Continued posting of comments that violate this policy will result in the commenter being banned from the site.