Hiring for the school year added 31,100 jobs to the state's economy in August. by Zachary Ziegler Tweet 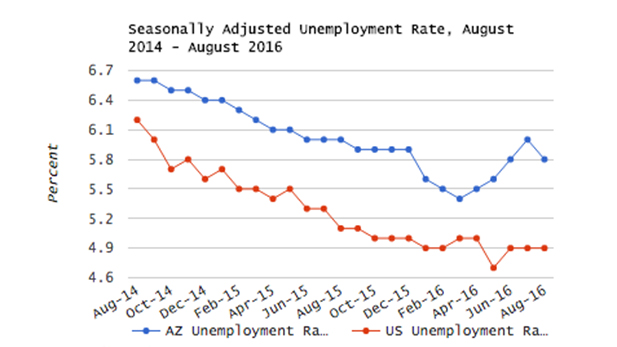 Statewide joblessness had been on the rise since March.

The rise in jobs around the state is due to the public sector, where schools are rehiring staff for the academic year.

Drops in education and industries that are affected by warm weather often mean summer employment reports are not strong.

“During the summer months, we do normally see a slowdown in employment due to the summer weather. We see a lot of decline in summer employment in local and state education, leisure and hospitality," said Doug Walls, a research analyst who oversees the monthly employment report.

While new jobs from the public sector boosted August's report, the private sector did the opposite.

Nongovernment jobs dropped by 1,500 last month. Walls said such a drop in August is atypical.

Arizona Jobless Rate 5.2%, Lowest in More Than 8 Years September Sees Back-to-School Boost for Arizona Employment Arizona Unemployment Grows for Fourth Straight Month
By posting comments, you agree to our
AZPM encourages comments, but comments that contain profanity, unrelated information, threats, libel, defamatory statements, obscenities, pornography or that violate the law are not allowed. Comments that promote commercial products or services are not allowed. Comments in violation of this policy will be removed. Continued posting of comments that violate this policy will result in the commenter being banned from the site.