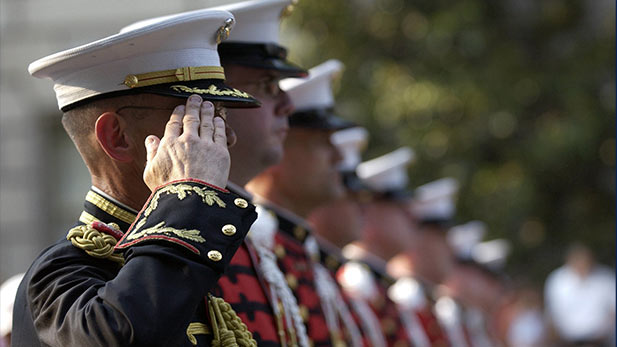 A soldier salutes a military procession.

In Tucson, the 97th annual Veteran’s Day parade will wind through downtown beginning at 11 a.m. Friday, and the theme of this year’s parade is “Remember Pearl Harbor: 75 Years Later.”

Road closures start at 8 a.m. and will end at 1 p.m. Police officers will be in the area to direct traffic.

For information on parking and the parade route are available on the parade website.

The 162nd Fighter Wing from the Arizona National Guard will provided a flyover at the parade.

Three Dozen Vets Honored in Tucson for Service in Vietnam Visit Camp Bravo, a Base for Homeless Vets in Tucson Remembering Tucson Female WWII Pilot, As Another Laid To Rest in Site of Honor
By posting comments, you agree to our
AZPM encourages comments, but comments that contain profanity, unrelated information, threats, libel, defamatory statements, obscenities, pornography or that violate the law are not allowed. Comments that promote commercial products or services are not allowed. Comments in violation of this policy will be removed. Continued posting of comments that violate this policy will result in the commenter being banned from the site.