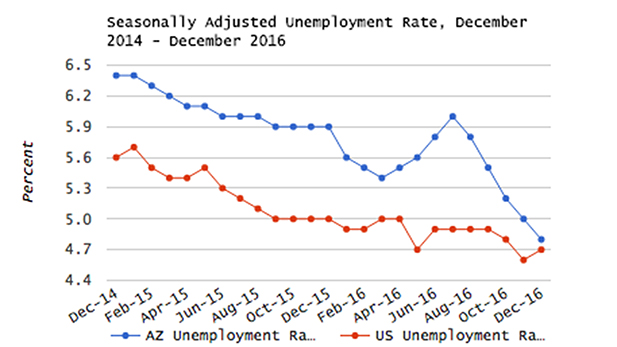 A chart showing unemployment in Arizona for December 2016.
Arizona Office of Economic Opportunity

Arizona's unemployment rate continues to drop, and is now the lowest it has been since February 2008.

The percentage of Arizonans looking for work went down two-tenths of a percentage point in December, and is now perched 0.1 percent above the U.S. average.

And, according to the state office that computes the number, the statistics behind the rate show job growth continues in Arizona.

In the past, drops in unemployment occurred when people quit looking for jobs and dropped out of the labor force. But that has not been the case lately.

December capped off a year of economic growth in Arizona. The state added 32,000 jobs, all of which were in the private sector. Education and Health Services saw the most growth, adding 14,600 jobs.

Hourly wages also increased in 2016, ending the year up 3.3 percent.

Arizona Unemployment Flat at 5%; Seasonal Job Loss High Economic Outlook: Improving Tucson Employment Picture Real estate, rents continue to climb as housing crunch continues
By posting comments, you agree to our
AZPM encourages comments, but comments that contain profanity, unrelated information, threats, libel, defamatory statements, obscenities, pornography or that violate the law are not allowed. Comments that promote commercial products or services are not allowed. Comments in violation of this policy will be removed. Continued posting of comments that violate this policy will result in the commenter being banned from the site.