Learn more about school plans during the #RedForEd protests and walkout. Tweet 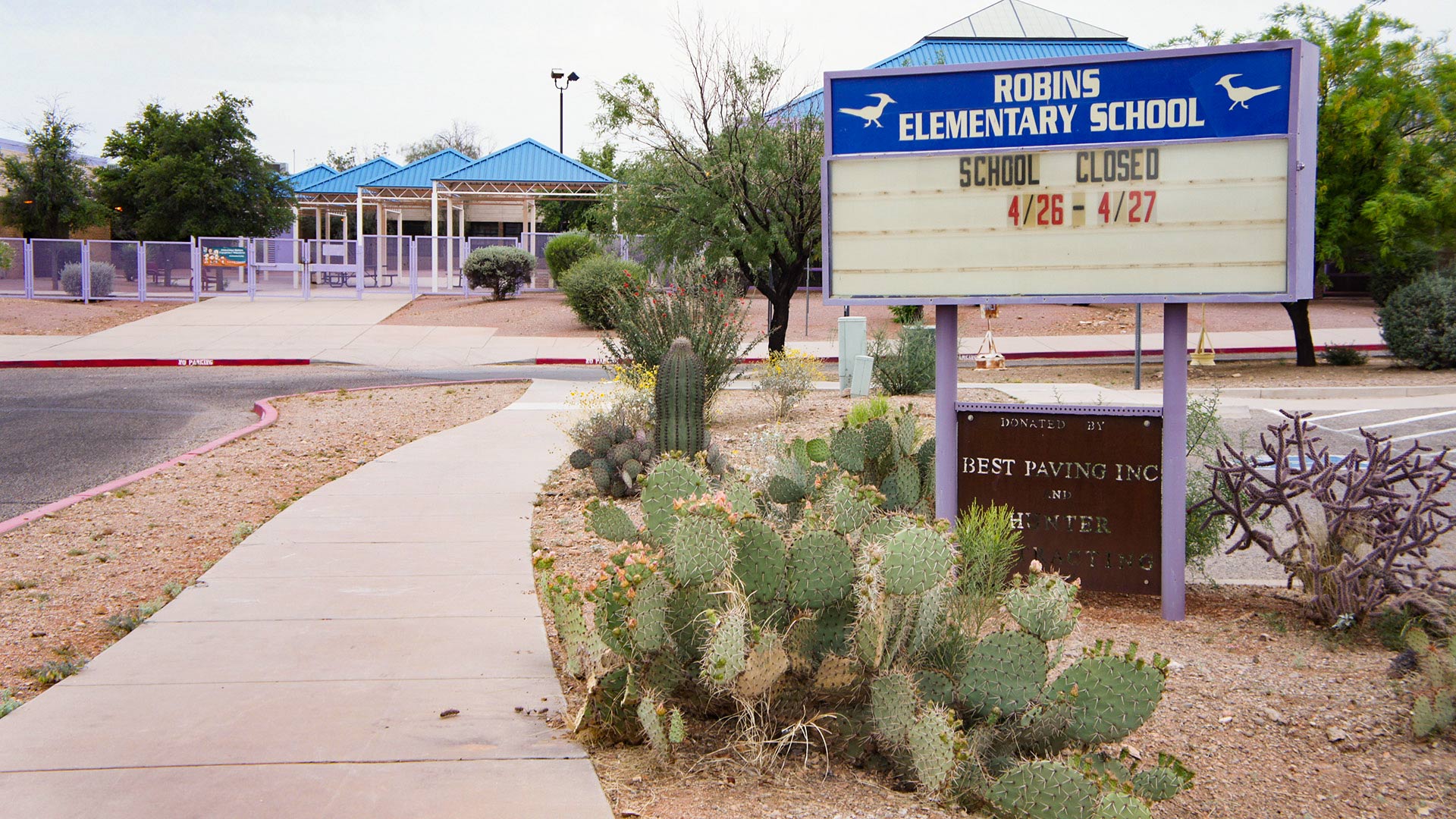 Robins K-8, in Tucson Unified School District, is among the closed schools during the teacher's strike.
Zac Ziegler, AZPM

The text of this story will no longer be updated. Please see basic closure info in graphic below.

Estimates suggest more than 50,000 educators and supporters marched in Phoenix on Thursday, April 26, to demonstrate for increased education funding, as part of a movement that has been referred to as #RedForEd. At the beginning of the following week, when the walkout would end was not clear.

The group Arizona Educators United said the movement is asking for 20 percent teacher salary increases and $1 billion in education funding. Teachers in Arizona say they've decided to walk out until legislation is passed that will satisfy their demands.

State laws and current district policies state that any day a school is closed must be made up at the end of the current school year.

Here is what you need to know about your district and how it plans to communicate.

Tucson Unified School District said in a Facebook post Monday, April 30, that it would be canceling classes Tuesday, May 1.

"This decision was made based on the Arizona Educators United call for a continued walkout and reported teacher absences for that day," the district's Facebook page said.

In the post, the district said breakfast and lunch food services would be available for students 18 years old and under at all schools except Warren Elementary.

The Tucson Unified School District announced Tuesday, April 24, that all schools would close on Thursday, April 26, for the walkout. Superintendent Gabriel Trujillo in a media briefing said the district was unable to secure enough staff, with 2,196 teachers out of 3,200 reporting they would not be in school Thursday of that week.

Trujillo said before the walkout that even when schools are closed to students, employees can still come to work.

The district asks that all parents or guardians make sure their contact information with the school is up to date and use the website and school and district social media accounts to be informed of updates.

The district said preschool and before- and after-school programs will be closed. The Brichta and Schumaker infant and early-learning centers will stay open, the district said.

The district said it will be sending out daily communications.

The Sunnyside Unified School District announced all schools will be closed for the remainder of the week, May 1-4, according to the district's website.

In a letter to parents posted on the district website, officials said they will not have enough staff to open schools or provide transportation.

Schools will be open for breakfast and lunch and parents can take their students to any Sunnyside School for those services.

All after-school activities and athletics are also cancelled.

Officials said the closure will not affect attendance records, so parents do not have to call the school to say a child will not be there.

The letter said the district hoped to resume classes Tuesday, May 1, and would release an update by Monday afternoon.

Sunnyside is scheduled to end the school year on May 24. The letter said that date will not change if schools reopen quickly.

Marana Unified School District announced all 18 schools will be closed Tuesday, May 1 because the district cannot appropriately supervise students and ensure student safety, according to a press release sent to all parents and guardians Monday, April 30.

The district says it will remain closed until it has enough staff to reopen according to the press release, and asked parents to make sure their contact information is up to date with the school.

Breakfast and lunch meals will be served at some schools through the district's Marana Cares Mobile service.

The school closure will not affect graduation ceremonies, MUSD said before the walkout, but students may be required to come back after that ceremony to complete the school year.

Amphitheater announced on Monday it would be closing its 21 schools on Tuesday, May 1 based on inquiries to staff about their intentions for the walkout, a release said.

"We are continuing to monitor this situation on a daily basis and will try to inform you as quickly as we know we will be able to reopen our schools," Superintendent Todd Jaeger said in a statement on the district's website.

The district instructed parents and guardians to monitor for updates on its website and social media accounts.

All school kitchens will remain open in the mornings, when students can pick up breakfast and lunch meals, the release said.

The district previously said if schools are closed, so will all before- and after-school childcare, ACHIEVE, after-school tutoring and extracurricular clubs at those schools.

Catalina Foothills has announced all schools within the district will be closed Monday, April 30 until the teacher walkout ends, according to Julie Farbarik, director of communications for the district.

Catalina Foothills posted a FAQ to its Facebook page April 20 urging families to update their contact info and monitor all district communications, including the district website, SchoolMessenger notification system and social media accounts.

The district's Facebook page said Community Schools' services will not be available and that varsity sports would be the only athletics to continue practice or games, depending on coach availability.

Any missed school days would likely be made up at the end of the year, the FAQ said. High school graduation would still take place on May 23, but graduating seniors may need to make up stoppage days.

TVUSD schools will remain closed through Tuesday, May 1 according to a press release sent to parents and guardians on Monday, April 30.

"After receiving guidance from the Arizona Department of Education, we have determined we will be required to extend the school calendar to replace instructional time lost during the closure," Superintendent Scott Hagerman said in a press release.

Hagerman asked parents and guardians to monitor school communications for updates, as the duration of the walkout was unclear.

The release said athletics activities will continue, but extracurricular programming and certain field trips may be subject to cancellation.

The letter urged parents and guardians to make arrangements for the care of their children on Thursday and Friday.

In a letter to families Friday afternoon, Sahuarita Superintedent Manual Valenzuela said district schools will remain closed Monday, April 30 based on a survey.

The district anticipates it would have to add school days at the end of the semester to make up for any days missed due to a strike.

An announcement on the Flowing Wells Unified School District website Friday afternoon said all schools would be canceled the following Monday, April 30.

The announcement asked parents and guardians to monitor for updates.

The school said breakfast would be provided at elementary schools between 7:30-8:15 a.m., and lunch 11:45 a.m.-12:30 p.m. All before- and after-school programming, student services and activities would be canceled, except for varsity athletics and certain field trips.

The district urged families to update their contact information with their school and monitor the district website and social media accounts for updates.

More information can be found on the district website.

The note simply read, "Vail Schools will be open tomorrow, Tuesday, May 1. Welcome back."

On the district Facebook page, Baker wrote that "most regular teachers will be present. Instruction will occur."

The Vail Unified School District announced Tuesday before the walkout it was closing schools Thursday and Friday due to "inadequate staffing."

The district posted a list of Frequently Asked Questions including information on graduation and long-term field trips.

The Altar Valley School District said before the walkout it would remain open if it had enough teachers but "may be forced to close." The district will use the auto-dialer system to notify parents and students of changes. The determination will be made on a school-by-school basis.

Ajo district officials said they would use Facebook to notify families.

The school was set to be closed for the first two hours of classes in Thursday due to a planned power outage.

The Baboquivari Unified School District said prior to the walkout it intended to close its campuses on Thursday, according to a letter from Superintendent Edna Morris. She wrote that she believed the closure would last only that day. A post on the school's website said it will announce via School Messenger if plans change.

"The good news is that we are over our Instructional Minutes required at each school and will not have to make up this day at the end of the year," said Morris in the letter, which was posted to the district's Facebook page.

Arizona State Schools for the Deaf and Blind — Tucson

All Tucson schools have remained open since the start of the teacher walkout according to officials with Arizona State Schools for the Deaf.

On Wednesday, Pima JTED said programs resulting from its member district schools would be closed Thursday and Friday because of low attendance due to the walkout.

Central Campus Skills classes scheduled for Saturday were not canceled, nor was a Friday event called Meet the Teacher Night.

The district asked parents and guardians to make sure their contact info was up to date, or to monitor the district website and social media accounts for updates.

On Friday, Sierra Vista Unified School District announced it intends to keep schools closed on Monday, April 30. The district says schools will reopen when administration can verify enough sufficient supervision in all schools for safe operations, or when the state walkout ends.

Goldwater Institute Threatens School Districts With Walkout Lawsuit Inside School District's Decision to Close Because of Teacher Walkout Thousands of Educators and Supporters March in Phoenix for Walkout
By posting comments, you agree to our
AZPM encourages comments, but comments that contain profanity, unrelated information, threats, libel, defamatory statements, obscenities, pornography or that violate the law are not allowed. Comments that promote commercial products or services are not allowed. Comments in violation of this policy will be removed. Continued posting of comments that violate this policy will result in the commenter being banned from the site.