Artists will complete work early next month as part of beautification program. by Vanessa Barchfield Tweet 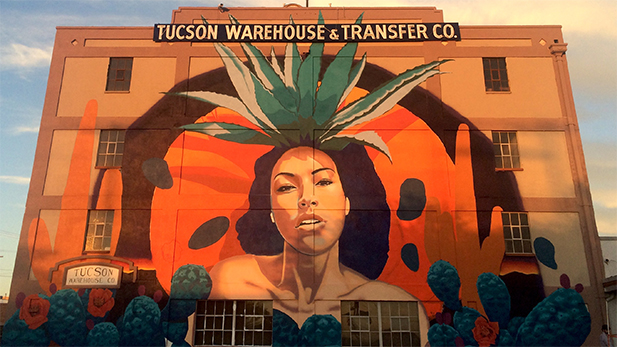 An agave goddess gazes from the side of the Benjamin Supply building on 6th Street and 7th Avenue in May 2016.
Janelle Gleeson
Photo courtesy Janelle Gleeson

A brick wall behind downtown Tucson's Rialto Theater is adorned with the image of a cowgirl riding a horned jackrabbit like it’s a rodeo bull. A few blocks away, on Pennington Street, a giant Sagrado Corazón takes flight. Across the tracks is a woman with agave sprouting from her head, gazing into the sunset from the side of the Benjamin Supply building on 6th Street and 7th Avenue.

They are among the eight works local artists are painting this month, part of the Tucson Arts Brigade’s Tucson Mural Arts Program.

The agave goddess is the work of graffiti artist Rock Martinez.

"She is basically a representation of the desert," Martinez said.

Martinez said his piece can mean many things, but he does want it to speak to people. Art, he said, is a language.

"And I hope that mine is perceived as beautification and cultural preservation in Tucson," he said. "[I'm] just trying to share that, how we’re all connected as one."

He said he wants his mural to stay up for so long has to come back when he’s old to touch it up.

In other words, his hope for his agave goddess is that she becomes an icon of the community, just like the building she’s painted on.

A July episode of Arizona Illustrated will feature a story about the mural project. For a behind-the-scenes look, follow the program's Instagram. 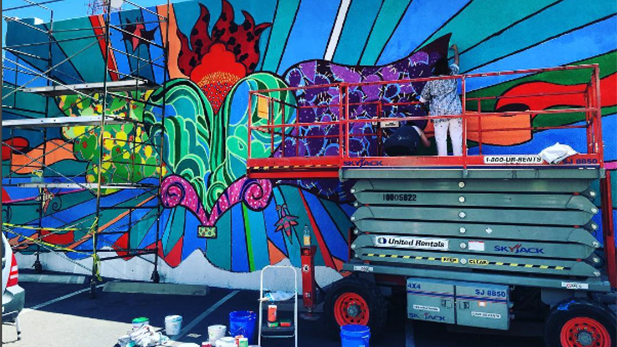 Parade of Lights, Festival in Downtown Tucson Saturday New Business Opens Downtown Every 12 Days, Data Show Downtown Rebound: Tucson Entertainment Finds Life
By posting comments, you agree to our
AZPM encourages comments, but comments that contain profanity, unrelated information, threats, libel, defamatory statements, obscenities, pornography or that violate the law are not allowed. Comments that promote commercial products or services are not allowed. Comments in violation of this policy will be removed. Continued posting of comments that violate this policy will result in the commenter being banned from the site.