Q&A: How Walkout by Arizona Teachers is Expected to Play Out

Details and background about Thursday's planned action by educators and school staff across the state. by Melissa Daniels, Associated Press Tweet 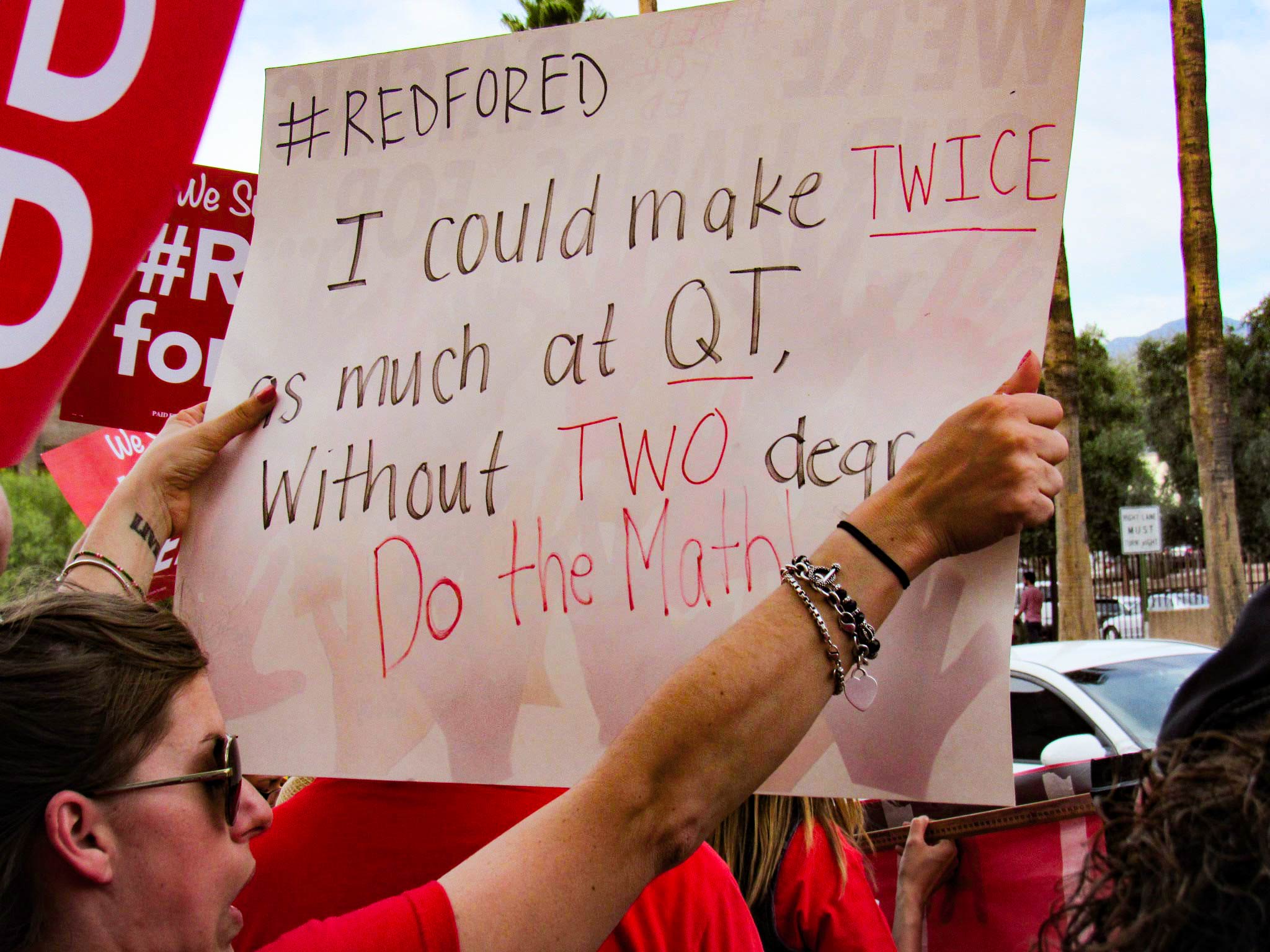 A teacher holds a sign saying she could make more as a QuikTrip convenience store employee than as a teacher.
Brandon Mejia, AZPM

PHOENIX — Tens of thousands of Arizona teachers are poised to walk off the job this week to demand more funding for public education, an unprecedented action in this conservative state without many union protections.

Educators who are among the lowest-paid in the U.S. have organized weeks of protests seeking raises and a boost in overall school funding, culminating in a vote for the first-ever statewide strike.

It comes despite a plan from Republican Gov. Doug Ducey to increase teacher pay 20 percent by 2020. Teachers are concerned about a lack of stable funding and a failure to address other demands.

A grass-roots teachers group mobilized the #RedforEd campaign, with backing from the Arizona Education Association, the largest teacher membership group. But the association lacks the power to collectively bargain with school districts or require mandatory participation in this right-to-work state.

That has led to a disparity across school districts in how to handle the walkout and could lead to fallout for Arizona educators.

Here's a look at what's happening:

What's a walkout and what will happen?

A walkout is a job action that can be used as a protest, and teachers plan to launch it statewide Thursday, with no end date set. With 78 percent of roughly 57,000 educators voting in favor last week, tens of thousands of teachers are expected to participate. Many are expected to attend a rally at the state Capitol.

Their participation could have consequences. Some states, like New York, prohibit strikes outright, but Arizona's situation is less clear.

The education association has warned its 20,000 members about a 1971 Arizona attorney general opinion saying a statewide strike would be illegal under common law and participants could lose their teaching credentials. No school district has said they would fire educators who strike or revoke teaching certificates.

Teachers in some districts have been advised to take personal leave time to participate.

What are the demands?

The one that received the most attention is a 20 percent raise for teachers who earn an average of $47,218 annually, compared with a national average of $58,353, according to 2016 data from the National Education Association. They also want yearly raises until their salaries reach the national average and competitive wages for classified staffers.

Another demand is a return to pre-Great Recession spending levels, which would be roughly a $1 billion increase annually. Part of that includes the goal of driving down class sizes to a 23:1 ratio.

The fifth demand is a freeze on tax cuts until spending on each student reaches the national average. A May 2017 report from the National Education Association says per-pupil spending in Arizona was $8,296, compared with $12,572 nationally.

How are the governor and lawmakers responding?

Ducey has offered teachers a 20 percent raise by 2020 and pledged to see his proposal through despite concerns by lawmakers of his own party. He vetoed 10 Republican measures recently to push the Legislature to send him a budget with the pay increase.

Ducey's plan relies on higher-than-expected state revenue. Republican legislative leaders have expressed concern about where the money might come from and are negotiating the plan this week.

What does the walkout mean for schools, teachers and parents?

The state's nearly 200 public school districts can try to keep schools open or can close them down.

Districts were still determining their plans, but the state's largest district in suburban Phoenix and many others have warned parents they will shut down at least Thursday and Friday. Schools could be open if enough teachers, staff or administrators show up.

Many parents will have to make childcare plans. Community groups have opened registration for day camps, while some stay-at-home parents are volunteering to watch others' children. Local parent-teacher associations also are putting together food boxes for kids who rely on free breakfast and lunch at school.

Hourly workers like custodians might not get paid if their schools close, but they would get a paycheck if the days are made up at the end of the school year.

What's happened in other states?

The Arizona campaign took inspiration from West Virginia, where teachers went on strike and got a raise. The movement also spread to Oklahoma, Kentucky and most recently Colorado, where over a dozen school districts are closing Thursday and Friday because of planned teacher protests.

Arizona has seen a unique blend of grass-roots uprising, with help from the teachers association. Unions mobilized teachers in other states, though they also had little collective bargaining power with districts.

Like Arizona, Oklahoma is a right-to-work state, where teachers spent two weeks on strike, even after money was approved for teacher raises and more school funding. West Virginia officials said a strike was illegal, but the nine-day action led to a 5 percent pay increase, much lower than what Arizona teachers have been offered.

Vail Schools to Open Tuesday Teacher Walkout: School Cancellation and Communication #RedForEd Teacher Protests
By posting comments, you agree to our
AZPM encourages comments, but comments that contain profanity, unrelated information, threats, libel, defamatory statements, obscenities, pornography or that violate the law are not allowed. Comments that promote commercial products or services are not allowed. Comments in violation of this policy will be removed. Continued posting of comments that violate this policy will result in the commenter being banned from the site.